1 in 5 Smartphones Sold in Q4 Was an iPhone 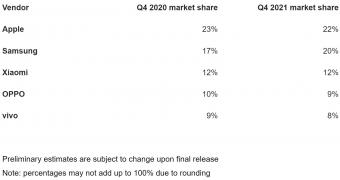 The iPhone keeps selling like hotcakes all over the world, with statistics shared by Canalys indicating Apple’s device was the most popular smartphone in the fourth quarter of 2021.

More specifically, the Cupertino-based tech giant accounted for no less than 22 percent of the phone sales worldwide, which means that more than 1 in 5 phones solid during the quarter was an iPhone.

Xiaomi continued to be the number three in the charts with a 12 percent share, followed by OPPO and vivo.

“Apple is back at the top of the smartphone market after three quarters, driven by a stellar performance from the iPhone 13,” said Canalys Analyst Sanyam Chaurasia.