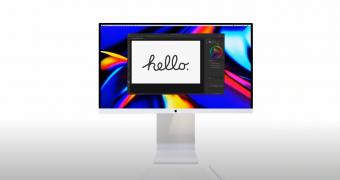 While users have been drooling after major upgrades on Apple’s Mac computers for quite some time, the Cupertino-based tech giant has rather focused on baby steps, bringing more or less subtle refinements to its laptops and desktop PCs.

And while for many these upgrades are just enough, others expect Apple to bring a much bigger overhaul to its devices, including touch support, something that Microsoft is betting big on its Surface PC lineup but which the Cupertino-based tech giant doesn’t seem to be very interested in.

A concept that envisions a 2020 Apple iMac, however, proposes a much bigger facelift of the device which many users would just love.

First and foremost, it all starts with a new design that uses a bezeless approach with a 28-inch 5K Retina display and up to 600 nits brightness. Needless to say, this is a welcome upgrade that makes sense on a desktop computer, especially given the increased screen estate.

And of course, the concept proposes major up… (read more)