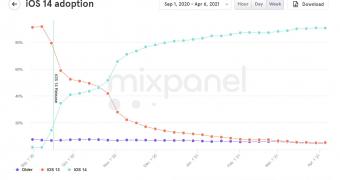 Apple rolled out iOS 14 with much fanfare the last fall, and since then, the company has been pushing for everybody to install the new OS version and benefit from things like App Library, widgets, and so many other improvements.

It’s not a secret, however, that Apple’s device ecosystem typically updates to new software versions quite quickly, and new data shared by Mixpanel indicates that in the case of iOS 14, the adoption has already reached 90 percent.

In other words, more than 9 in 10 supported iPhones are already on iOS 14, while only 5 percent of the models are still on iOS 13.

iOS 14 is available for iPhone 6s and newer, but it’s believed the next operating system update would drop this model and only become available for the iPhone 7 and later.

What’s next for iOS

And speaking of the next iOS updates, Apple is currently working on iOS 14.5… (read more)