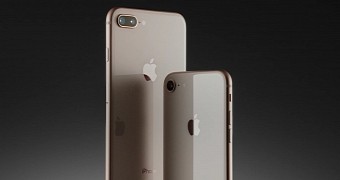 Just as rumored, the iPhone 8 lineup is made of glass, which the company says “is the most durable ever on a smartphone.”

The two devices feature screens that are the same sizes as on the iPhone 7, so we have a 4.7-inch screen and a 5.5-inch one on the Plus.

The devices come with TrueTone displays and improved speakers, which are 25 percent louder than on the current generation.

Apple’s new chip powering the iPhone 8 is called A11 Bionic, which “is the most powerful and smartest chip ever in a smartphone” It has 6 cores with 2 high-performance cores that are 25% fast than on the A10, and 4 high-efficiency cores that are 70% faster than its predecessor. The iPhone 8 comes with Apple’s first-ever own GPU which is designed for 3D games.

In terms of camera, the iPhone 8 comes with a new 12-megapixel sensor with deeper pixels … (read more)