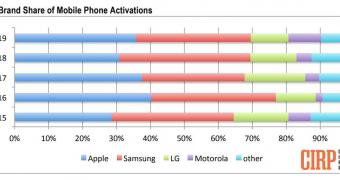 New data published by Consumer Intelligence Research partners (CIRP) reveals that Apple is once again the top brand based on the number of phone activations for the calendar quarter ending March 31.

The Cupertino-based tech giant has thus managed to beat Samsung once again, with the South Korean brand ranked second in this new report.

CIRP says Apple topped the charts with 36 percent of the activations, followed by Samsung with 35 percent. LG and Motorola are far behind with 11% and 10%, respectively.

When it comes to operating systems alone, Android is obviously the leading choice with no less than 64% of all US activations during the quarter. iOS is the runner-up with the remaining 36%.

“Brand shares are more variable,” said Mike Levin, Partner and Co-Founder of CIRP. “Samsung has typically had the highest share, from 30% to 39% depending on their product launch calendars. Apple share varied similarly, from 29% to 40%. The most notable trend has Motorola taking… (read more)