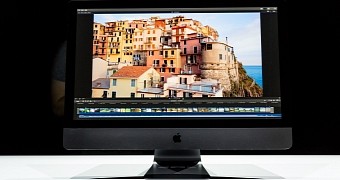 Apple is believed to be working on bringing a new series of features to the upcoming iMac Pro, including what could be “Hey Siri” command support enabled by a tweaked version of iPhone 7’s A10 Fusion chip.

BridgeOS code has revealed that Apple plans to use the iPhone 7 CPU as a co-processor to power a series of tasks in an approach similar to the one on its smartphone, thus making sure that the monster Xeon processor won’t kick in for less-demanding processes.

After inspecting the firmware, developer Steve Troughton-Smith says there’s a chance A10 will power the boot and security processes of macOS on the iMac Pro, while Guilherme Rambo discovered that Apple would most likely enable “Hey Siri” support on the device with the same chip.