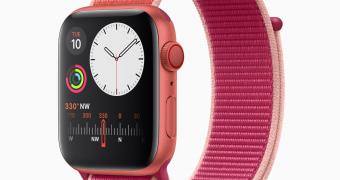 Apple could launch a (PRODUCT)RED version of the Apple Watch Series 5 as soon as the next year, according to a new report.

Before anything, it’s important to keep in mind that this is just a rumor, and despite it actually makes sense, it’s better to take everything with a pinch of salt until more reliable sources confirm it.

The report coming from French blog WatchGeneration indicates that the red Apple Watch Series 5 would be part of the (PRODUCT)RED lineup which already comprises a series of other Apple products.

Apple donates a part of the revenue it makes with (PRODUCT)RED devices to (RED) partners that use the money to fund HIV/AIDS programs. According to Apple, “for 13 years, supporters of our partnership with (RED) have raised more than $220 million in funding for HIV/AIDS programs.”

Possible launch in the spring