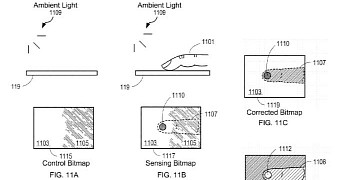 The patent application was filed back in 2014, which means that Apple had plenty of time to perfect the method and it might actually be featured on the iPhone 8. The upcoming iPhone 8 or iPhone X will mark the 10-year anniversary since the first iPhone was released.

The smartphone is said to come with major design changes, tiny bezels and even a slightly curved display. In order to achieve smaller bezels, Apple could very well remove the physical home button and place the fingerprint scanner below the display.

The new method can only be used on OLED displays