Apple Is Now Paying Less for Your Used Devices 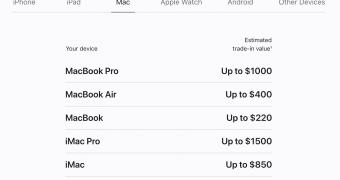 Apple’s trade-in programs are a great way to get your hands on a brand-new device and cut the price using your existing smartphone, tablet, or laptop, and more often than not, the company is baying big bucks on used devices.

The trade-in programs are therefore working like a charm in those regions where they are available, such as in the United States.

But most recently, the Cupertino-based tech giant has reduced the trade-in value of some devices, including MacBooks, iPads, and Apple Watch models.

This means the company is now paying less for your used devices, with the trade-in value going down by as much as $350 in the case of MacBook Pros.

As iDropNews noticed, this only happens for used MacBooks, iPads, and Apple Watches. The MacBook Pro, for example, was eligible for a maximum trade-in value of $1,350 before the change, but right now, … (read more)