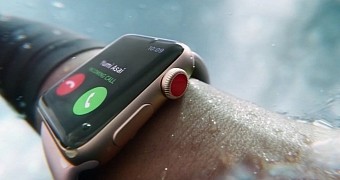 Apple has just announced the third-generation Apple Watch, officially called the Apple Watch Series 3, which comes with a series of hardware improvements and the updated watchOS 4.

The new Apple Watch looks similar to the existing models, and this can only be good news for those who have already purchased a previous model because the same bands can be used as well.

Apple has upgraded the heart rate sensor with BPM information that’s displayed right on the Watch face as a complication, while also displaying the rest rate and the recovery information – these are features that are available on the more powerful activity trackers, so Apple is clearly looking into investing in this side of the market.

The new-generation Apple Watch is powered by watchOS 4, which will launch on September 19 for all existing models as well.

The biggest improvement coming with the new generation is support for LTE, which basically makes the Watch … (read more)