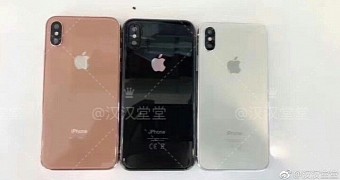 The iPhone 8 is an all but confirmed product, and while we already know pretty much everything about it, there still are a few details that are yet to be disclosed.

A leak that reached the web today allegedly claims to reveal the iPhone 8 colors, which apparently Apple wants to update from the current generations with some subtle tweaks.

The leaked photo reveals what seem to be three different iPhone 8 models coming in colors called copper, shiny black, and pearl, which are more or less new interpretations of the existing colors named Rose Gold, Jet Black, and Space Gray.

While the quality of the leak does not allow us to inspect the photo closer and spot any difference from the existing color lineup, there’s a chance that Apple indeed makes some subtle updates to mark the 10th anniversary of the iPhone.

Deep Blue iPhone? Not so fast

Apple has been hard to convince to bring new color versions to the iPhone lineup. The iPhone 7 series, for exampl… (read more)