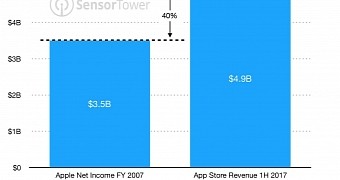 Apple is a money-making machine, there’s no doubt about that, and almost every single thing that wears the company’s logo becomes a successful product.

Living proof is the App Store, a service that Steve Jobs didn’t actually believe in at first, but which is now generating more money than what the total revenue of the entire company back in 2007 when the iPhone was launched.

Figures provided by research firm SensorTower reveals that only in the first half of 2017, Apple generated revenue with the App Store of $4.9 billion. Ten years ago, the whole company had a net income of $3.5 billion, which means that the App Store alone brings home 40 percent more money than Apple did with all of its businesses in 2017.

And these statistics are not all surprising, as the App Store has continuously improved in the last years. Back in 2013, the App Store accounted for only 1 percent of Apple’s revenue, while in 2016, the… (read more)