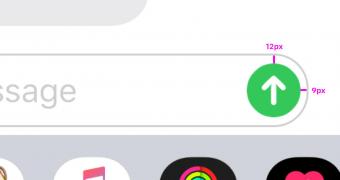 Apple is known as a company that seeks perfection in the smallest details, but as a bunch of designers discovered the hard way earlier this week, not even the Cupertino-based firm can get everything right.

A Vietnamese designer called Anh took to Twitter to reveal something that some described as “disturbing” and which everyone has a hard time unseeing right now: a slightly misaligned send message button on the iPhone that Apple for some reason totally messed up.

Basically, what Ahn came across is a 25 percent difference in the way the send message button is aligned in the box, creating a discrepancy that’s not necessarily easy to notice when zoomed out, but which might be triggering some people’s OCDs after zooming in.