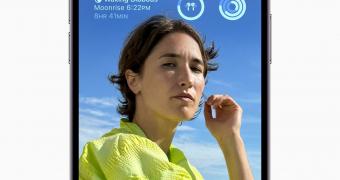 Apple has officially started the rollout of iOS 14, the latest version of its mobile operating system that’s available today for the iPhone 8 and newer.

Previewed at WWDC earlier this year, iOS 14 obviously comes with lots of improvements, including a redesigned lock screen that supports widgets.

However, the widgets come in the form of complications originally launched on the Apple Watch, so users will be able to see certain information, such as calendar appointments and alarms without having to unlock their iPhones.

“The Lock Screen gets more personal, beautiful, and helpful with iOS 16. With a new multilayered effect, the subjects of photos are artfully set in front of the time on the Lock Screen, creating a sense of depth. Users can also change the look of the date and time with expressive type styles and color choices,” Apple said earlier this year when it announced the new iOS version.