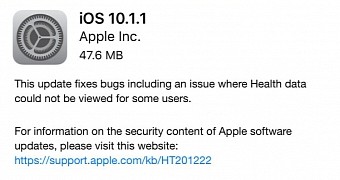 As written in the release notes of the update notification you’ll receive on your supported iPhone, iPad, or iPod touch device running iOS 10.1, the iOS 10.1.1 update is here to address various important bugs reported by users since the previous update, as well as to fix an issue where the data of the Health app was not visible to everyone.

Therefore, we recommend that you update your iPhone, iPad, or iPod touch devices running the iOS 10.1 mobile operating system to version 10.1.1 as soon as possible via “Settings -> General -> Software Updates.” Also today, just a few moments ago, Apple seeded the first Beta build of iOS 10.2 to devs enrolled in the Apple Developer program.