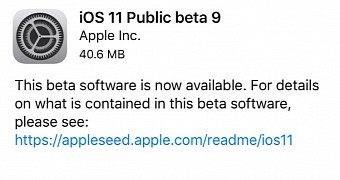 After releasing the tenth Beta of its forthcoming tvOS 11 operating system for 4th generation Apple TV devices yesterday morning, Apple today seeded the both the iOS 11 Beta 10 and Public Beta 9 builds to users.

Apple plans to launch the next generation iPhone devices on September 12, 2017, which is less than a week from today, but it looks like they’re still working on patching security issues and bugs for the iOS 11 operating system that will power the new handsets.

The release of an unexpected tenth Beta of iOS 11 only means that Apple has fixed some last minute bugs in the forthcoming OS, which is a good thing, and we recommend all users running iOS 11 Beta 8 or Public Beta 7 to go ahead and update their devices immediately.

Registered developers with an active Apple Developer subscription can find iOS 11 Beta 10, which was tagged as build number 15A5372a, on the dedicated downloads section, for their registered devices. On the other hand, public beta testers … (read more)