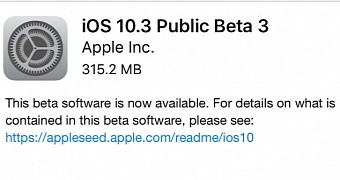 We reported the other day that Apple has seeded the third Beta builds of all of its upcoming operating systems, including iOS 10.3, macOS Sierra 10.12.4, watchOS 3.2, and tvOS 10.2, to registered developers that have an active Apple Developer account.

As expected, 24 hours after the release of the Beta 3 developer builds, Apple pushed new Public Beta builds, the third in the current development series, for iOS 10.3 and macOS Sierra 10.12.4, which anyone who owns a supported iPhone, iPad, iPod touch, or Mac device can install.

As such, and as we told you in our <a href="http://news.softpedia.com/news/apple-outs-third-beta-of-… (read more)