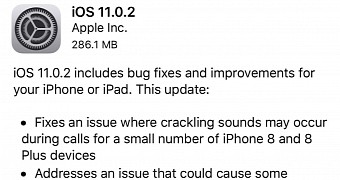 Apple has just released iOS 11.0.2 for iPhone, iPad, and iPod touch, as the second bugfix for the core version 11 of its mobile operating system.

According to the changelog that shows up on devices being offered the update, the new version includes a fix for an issue causing a crackling sound during calls on iPhone 8 and iPhone 8 Plus. Unsurprisingly, Apple says that only “a small number” of units were affected, but we all know what that means.

Additionally, there’s a bugfix aimed at a problem causing photos to be hidden, as well as a patch for the bug leading to attachments in S/MIME encrypted emails to fail to open.

No word on possible battery fix

Aside from the three fixes mentioned above no other specifics were provided on more widespread reports, but given that it lands only approximately a week after the previous update, it’s not hard to figure out that the focus has been on fixing bugs found in 11.0.1.

And as most of the iPhone users prob… (read more)