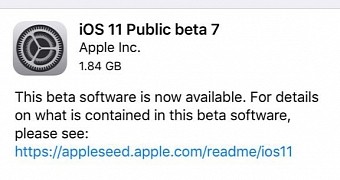 Apple has launched new beta versions of IOS 11 for both developers and public testers, as the company is now giving the final touches to the next release of its mobile operating system.

iOS 11 beta 8 for developers and beta 7 for public testers are both up for grabs from Settings > General > Software Update on iPhones that have been enrolled in Apple’s beta program.

As it’s the case of all the other beta versions of iOS, it’s hard to tell what’s new, as the focus is most of the time aimed at fixing bugs and refining specific features of the operating system, without any visible changes to users.

On the other hand, this is particularly important for both Apple and its users, especially since we’re getting closer to the official launch date of iOS 11 and the company needs to make sure the operating system runs as smoothly as possible for everyone.