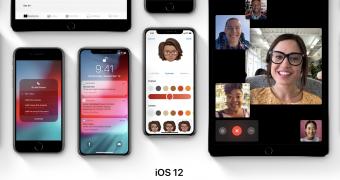 Apple has released today the highly anticipated iOS 12 software update for iPhone, iPad, and iPod Touch devices, a major release that adds numerous new features, dozens of improvements, and a bunch of new and exciting apps.

More four months in the works, the iOS 12 operating system is a major update and a worthy one that brings much-needed performance improvements to older iPhone and iPad devices, making them much faster, while making all supported devices more reliable, stable, and secure.

With iOS 12, users will experience twice as fast app launch times under heavy workloads, up to 70 percent faster swipe to Camera gesture, as well as up to 50 percent faster keyboard display. But that’s not all, as iOS 12 includes numerous new features and enhancements listed in the next paragraphs.