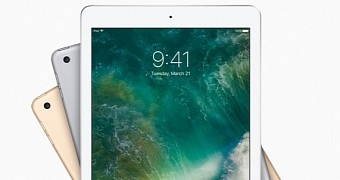 Today, Apple announced new red color variants for the iPhone 7 and iPhone 7 Plus, together with a new iPad that would replace the current iPad Air 2. The iPad introduced by Apple today is quite similar to the iPad Air 2, but it does feature some differences.

The new Apple iPad comes with an A9 chip and a brighter Retina display. Apple simply called the new tablet “iPad,” after the company decided to discontinue the Air 2. The device is an entry-level tablet with a 9.7-inch display and prices reaching $329 for the 32GB variant and $429 for the model with 128GB of internal storage.

The tablet doesn’t have a fully laminated display or anti-reflective coating, but it does feature a 2048 x 1536 resolution and 264pp… (read more)