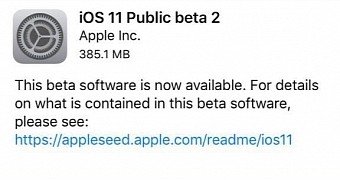 After seeding a couple of days ago the third Beta builds of its upcoming iOS 11, macOS 10.13 High Sierra, and tvOS 11 operating systems to registered developers, Apple today released the second Public Beta of iOS 11, tvOS 11, and macOS High Sierra.

Two weeks ago, on June 26, Apple announced the first Public Beta release of iOS 11, macOS 10.13 High Sierra, and, for the first time, tvOS 11, allowing anyone who wanted to get an early glimpse of what’s coming to the major operating systems, which should launch this fall, probably in late September.