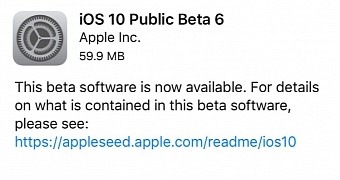 Apple surprised everyone tonight by releasing one last Beta build of the upcoming iOS 10 mobile operating system to both public beta testers and developers enrolled into its Apple Developer program.

Both iOS 10 Public Beta 6 and Beta 7 development milestones are now live for those running any of the previous released, and you can update your iPhone, iPad, or iPod touch devices via the built-in updater (Settings -> General -> Software Update).

We believe that this might just be the last Beta builds Apple will seed for its upcoming iOS 10 mobile operating system before the official launch in the first week of September, when the Cupertino company will also announce new, long-anticipated products.

It appears that Apple seeded new Betas only for the iOS 10 operating system, most probably to patch a sever security issue discovered or reported by security researchers since the previous Beta builds.

The next iPhone will be powered by iOS 10

There are a… (read more)