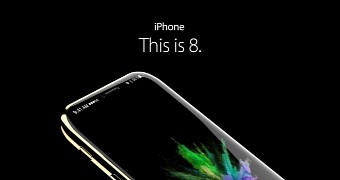 Samsung Display has reportedly signed a new deal with Apple to supply an additional 60 million units of organic light-emitting diode panels (OLED) for the next-generation iPhone. Apple has long been rumored to feature Samsung OLED displays on the upcoming iPhone and the latest report from The Investor says Apple wants more such panels from the South Korean company.

Last year, Samsung signed a deal with Apple for supplying 100 million OLED display panels for the upcoming iPhone 8, expected to be announced in September 2017. Samsung incorporated OLED displays in almost 70% of all smartphone, especially flagship series.

With the last year’s iPhone 7, Apple incorporated an LCD display and it seems that the company is making a move towards OLED. For previous iPhone models, Apple contracted LG Display, Sharp and Japan Display to supply LCD screens.