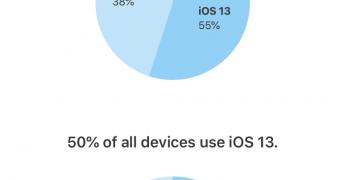 Apple has updated its App Store statistics page to inform us about the current adoption rate of its latest iOS 13 and iPadOS 13 mobile operating systems.

According to Apple’s latest statistics, the iOS 13 mobile operating system, which was launched last month, is already running on more than half of the supported iPhone and iPod touch devices available on the market and introduced in the last four years.

Compared to last year’s iOS 12 release, the iOS 13 mobile operating system saw a slightly better adoption among iPhone users despite dropping support for iPhone 6 and earlier devices. iOS 13 saw only 2% growth compared to iOS 12 on all supported devices introduced in the… (read more)