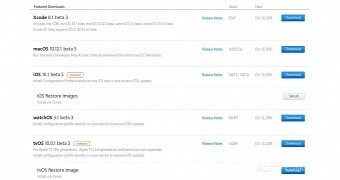 Today, October 19, 2016, Apple has seeded the fifth Beta builds of the upcoming macOS Sierra 10.12.1 and iOS 10.1 operating systems to both registered developers and public beta testers.

Tagged as build 16B2553a, the Public Beta 5 and Developer Beta 5 milestones of the macOS 10.12.1 Sierra operating system is now available for those running macOS Sierra 10.12.1 Beta 4 or Public Beta 4, and it comes one week after its release. You can install the new build on a supported Mac through the Mac App Store.

On the other hand, the iOS 10.1 Beta 5 release is tagged as builds 14B72 and 14B72c, depending on the devices where it is installed, namely iPhone 6, iPhone 6s, or iPhone 7, as well as various iPad and iPod touch models. However, a Public Beta 5 build is not available for iOS 10.1 at the moment of writing this article.