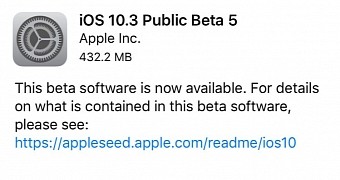 One day after releasing the fifth Beta of the forthcoming macOS 10.12.4 Sierra operating system to registered developers and public beta testers, Apple seeded today, March 8, 2017, the Beta 5 builds of iOS 10.3, watchOS 3.2, and tvOS 10.2.

There doesn’t appear to be any major differences between this fifth Beta builds and the fourth ones released at the end of February. Most probably, Apple fixed various minor issues and security vulnerabilities. Additionally, the upcoming Xcode 8.3 IDE (Integrated Developme… (read more)