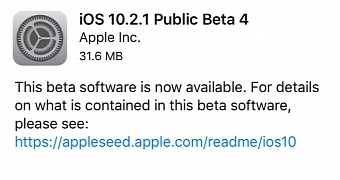 A new Beta has arrived for iOS and macOS users who are brave enough to register their iPhone, iPad, and iPod touch devices, or Mac computers, for Apple’s Beta Testing program.

Apple has seeded the fourth Beta release of its upcoming iOS 10.2.1 operating system, a first bugfix update to iOS 10.2 that should patch various security flaws discovered by researchers lately, as well as to add performance improvements. The Cupertino company also released today the Beta 4 version of macOS 10.12.3 Sierra.

These are currently tagged as build 14D27 for iOS 10.2.1 Beta 4 and build 16D30a for macOS 10.12.3 Beta 4, but the release notes are empty. If the third iOS 10.2.1 Beta made it possible to restore the new TV app introduced in iOS 10.2 after it’s deleted, this time Apple left no information about what was changed since Beta 3, which launched on Monday.

We’re using the latest iOS 10.2.1 Beta release, and we couldn’t help but notice a… (read more)