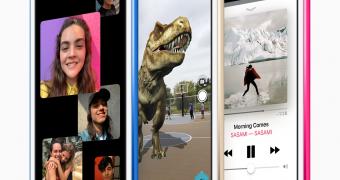 Apple announced today a new iPod touch device that comes with some notable enhancements to offer users a more modern iPod that is no longer dedicated to playing music.

Coming four years after the 6th generation iPod touch, Apple’s new iPod touch is powered by a powerful A10 Fusion chip, which not only improves the performance of the device when playng games, but, for the first ever, it introduces support for unimaginable AR (Augmented Reality) experiences and Group FaceTime support. It also comes with a new 256GB capacity option so you store all your favorite songs.

“We’re making the most affordable iOS device even better with performance that is twice as fast as before, Group FaceTime and augmented reality starting at just $199. The ultra-thin and lightweight design of iPod touch has always made it ideal for enjoying games, music and so much more wherever you go,… (read more)