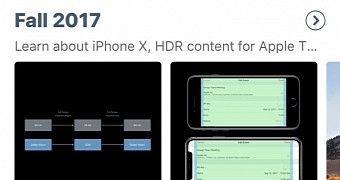 Apple updated its WWDC iOS app for supported devices with support for its latest iOS 11 mobile operating system and the 10th anniversary iPhone.

WWDC version 6.0.3 arrived a few hours in the iOS App Store for iPhone, iPad, iPod touch, Apple Watch, and Apple TV with support for the iPhone X, as well as iOS 11. The update also improves downloading of videos and viewing of photos from previous WWDC (Apple Worldwide Developer Conference) from the app.

Apple developed the WWDC app for iOS and watchOS to allow developers to make the most of its developers conference, and it’s most welcomed by those who can’t attend the even, which takes place every year in San Jose, California, to reveal Apple’s plans for the next major iOS, macOS, tvOS, and watchOS versions.

Next year, during the WWDC 2018 conference, Apple will unveil the new features and improvements it planned for the next next … (read more)