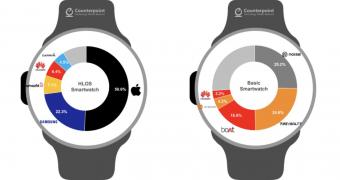 We’ve known for a while that the Apple Watch is selling like hotcakes, and new data shared by Counterpoint Research for the third quarter of the year reveals comes to reminds us of this.

Apple Watch clearly dominates the HLOS (high-level OS) market with a share of no less than 50.6 percent. This means that more than one in two devices sold in this category are the Apple Watch, with Samsung very, very, very far behind with a share of just 22.3 percent.

As far as the basic smartwatch market is concerned, the leader is noise, pretty much because Apple doesn’t have a model in this market.

Commenting on the Indian market, Counterpoint says the model that spearheads Apple’s sales right now is the Apple Watch Series 8.

“Apple grew 48% YoY thanks to strong sales of its newly released Apple Watch 8 series. Released in early September, the new series accounted for about 56% … (read more)