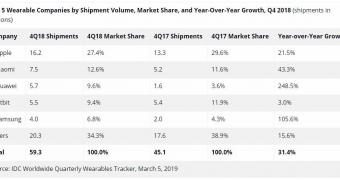 New data provided by IDC for the fourth quarter of 2018 shows that sales improved by no less than 31.4% worldwide, reaching a record of 59.3 million units.

Out of these shipments, smartwatches accounted for 34.3%, while wrist bands improved to 30%. Earn-worn devices like the AirPods secured 21.9% of the market, according to IDC.

When it comes to Apple alone, the Cupertino-based tech giant is clearly the undisputed leader of the wearable market with more than double the shipments of the runner-up.

Apple has thus remained number one during the quarter with total sales of 16.2 million units and a market share of 27.4%. This is up from 13.3 million units shipped in the fourth quarter of 2017 and a 29.6% share.

Second-placed Xiaomi is far behind with just 7.5 million units sold in Q4 2018 and 12.6% market share, followed by Huawei and Fitbit with 5.7 million and 5.5 million units, respectively.