Apple Watch Now Controls Nearly Half of the Smartwatch Market 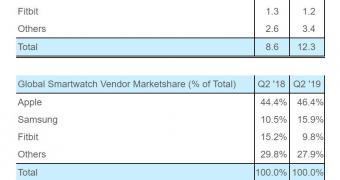 Nearly one in two smartwatches sold in the second quarter of 2019 was an Apple Watch, according to a new set of statistics, as Apple’s device managed to increase its market share from 44 percent to 46 percent.

Sales of the Apple Watch jumped from 3.8 million in Q2 2018 to no less than 5.7 million in the corresponding quarter of this year, Strategy Analytics claims.

Samsung continues to be the runner-up, but far-far away, with 2 million sold units, while Fitbit is third with 1.2 million units.

“Apple shipped 5.7 million smartwatches worldwide in Q2 2019, rising an above-average 50 percent from 3.8 million in Q2 2018. Apple Watch remains a long way ahead of the chasing pack and its global smartwatch marketshare has grown to 46 percent this quarter, up from 44 percent a year ago. Apple Watch has fended off strong competition from hungry rivals like Fitbit. Apple remains the clear smartwatch market leader,” Neil Mawston, Executive Director at Strategy Analytics, says…. (read more)