Apple Watch SE Is a Smartwatch That Just Makes Sense 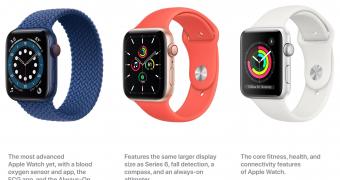 Earlier this month, Apple officially took the wraps off the Apple Watch Series 6, the smartwatch that the company describes as “the most advanced Apple Watch yet.”
‘
And truth be told, it really is, at least as far as the bundled capabilities are concerned, as it comes with a blood oxygen sensor, an ECG app, and the Always-On Retina display that was already available on the Apple Watch.

But at the same time, Apple has also announced the all-new Apple Watch SE, a surprising device that everybody knew it was coming but which the Cupertino-based tech giant still praised a lot during the digital event.

While many believe that a cheaper Apple Watch model actually compromises Apple’s image of a premium device maker, it really isn’t, and the company has found a clever approach to make it happen. All for a purpose that we’re going to discuss today.

First and foremost, let’s have a look at the specs.