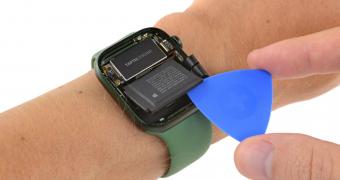 The Apple Watch Series 7 ended up becoming just a modest facelift to the Series 6 despite all the rumors regarding a potential design overhaul.

Apple, however, focused mostly on the updated sizes (as the watch is now available in 41mm and 45mm versions) and the faster charging, which should make charging the device overall more convenient.

But a teardown conducted this week by iFixit reveals that, in fact, the Apple Watch Series 7 comes with several updated internals, including larger batteries.

The 45mm model, for example, comes with a 309 mAh unit, which is 1.6 percent larger than the one on the Apple Watch Series 6 in 4mm size. The reason why Apple didn’t discuss the larger battery is because a bigger screen also comes with higher power consumption, so at the end of the day, there’s a chance there’s no real benefit in terms of battery life per c… (read more)