Home » iOS News » Apple’s iOS Continues to Grow in the US, Android Sees a Decline

Apple’s iOS Continues to Grow in the US, Android Sees a Decline 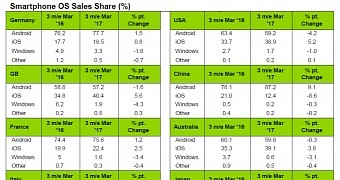 The latest smartphone OS data from Kantar Worldpanel reveals that Apple continues to rise its market share across most markets, except for China. iOS managed to record the greatest increase in the UK, with 40.4% of smartphone sales, but it also rose in the US.

iOS managed to grow 5.2% in the US and recorded 38.9% of all smartphone sales during the first quarter of this year. Android accounted for 59.2% of smartphone sales, compared to 63.4% last year. Kantar attributes the drop in sales of Android-running smartphones to lower sales of Samsung and Moto smartphones.

In the same period of time, iOS recorded the lowest share in China since 2014, accounting for 12.4% of smartphone sales in the country. By contrast, Android managed to grow 87.2% compared to last year, while Apple’s best-selling smartphone in China remained the iPhone 7 with 3.8% of the market mostl… (read more)