Apple’s iPhone 7 Not as Good as the Samsung Galaxy S8, Consumer Reports Says 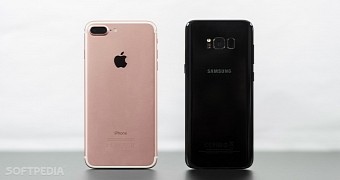 Apple has just lost another important fight against rival Samsung, as Consumer Reports crowned the Galaxy S8+ the world’s top smartphone ahead of the iPhone 7 and iPhone 7 Plus.

The most recent smartphone rankings published by Consumer Reports praise a series of features on the Samsung Galaxy S8, but at the same time, they also admit some of the shortcomings, like the fingerprint sensor that Samsung moved to the back of the phone near the camera.

While the Galaxy S8+ is crowned the number one smartphone at this point, the smaller Galaxy S8 is the runner-up, followed by the Galaxy S7 Edge, and the LG G6. The iPhone 7 Plus is only fifth in the charts, which is quite bad news for Apple, especially given that Samsung’s previous-generation flagship, the S7 Edge, is still ahead of its latest model.