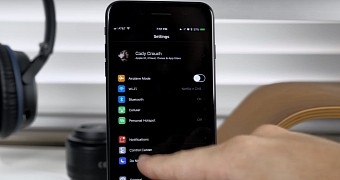 Dark themes are the new thing and they’re almost everywhere you look, including on desktops where even Microsoft admitted they’re awesome and brought them in Windows 10.

But as far as Apple is concerned, seeing the company aligning to the global trend is a thing that’s not happening too often, so even if iPhone users were drooling over a dark theme, Cupertino left all of them in desire.

And yet, it looks like the recently-announced iOS 11 brings us closer to a dark theme, as the company has introduced a new option that turns menus and apps all black.

How to enable the “dark theme”

Specifically, Apple is offering a new invert colors option in iOS 11 that’s very similar to the dark theme that everyone wanted on their iPhones. Previous versions of iOS already come with an invert color setting, but turning it on leads to warp colors that make everything look weird across the operating system.