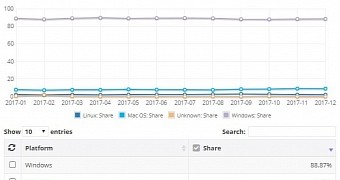 Windows was, is, and will continue to be the top desktop operating system out there despite Microsoft rivals every once in a while promising to launch alternatives capable of crushing Windows once and for all.

Statistics provided by NetMarketShare, however, show that in 2017 Windows remained the top choice for desktop users, but the more worrying thing for Microsoft is that Apple finally scored an important increase in this particular market.

More concerning is that while macOS increased its market share, Windows actually dropped, so the gap between the two desktop operating systems, despite still huge, was reduced last year.

Specifically, Windows started the year with a share of 89.03%, which means that approximately 8.9 PCs in 10 were running Microsoft’s desktop operating system. Windows, however, dropped to 88.51% in December, after previously reaching a record low point of 88.0% in October.