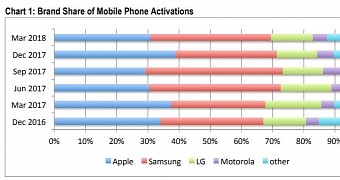 Samsung recorded the biggest number of activations in the March 2018 quarter, according to a new researcher, while Apple and LG were next.

This performance makes sense given the debut of the Galaxy S9 and Galaxy S9+, and Consumer Intelligence Research Partners (CIRP) says the two models propelled Samsung to the leading spot with 39% of all US mobile phone activations.

Apple was the runner-up with 31%, followed by LG with 14%, while all the other brands accounted for 17% of activations.

CIRP says Samsung is the typical leader in this regard, and Apple only topped the charts in the December 2017 quarter following the launch of iPhone X.

“As iPhone demand settled in after these launches, and Samsung brought its new Galaxy S9 and S9+ to market, shares reverse, returning to the levels seen in recent quarters. Samsung improved its share over the March 2017 quarter, and o… (read more)