Bad News: iOS 11 Already Running on Half of Apple Devices 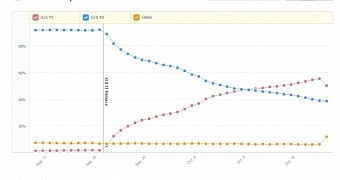 In just a month on the market, iOS 11 has reached an install base of no less than 54.49 percent, which means that more than half of the supported Apple devices are now running the most recent version of the operating system.

Analytics firm Mixpanel says that while nearly 55 percent of the supported devices are already on iOS 11, no less than 39.17 percent of them are still running iOS 10, while 6.34 percent stick with older versions of the operating system.

While having more than half of the supported devices running the latest version of iOS is quite an achievement after one month on the market, iOS 11 has provided terrible experience to a substantial number of users who decided to upgrade their iPhones and iPads.

iOS 11, the buggiest release so far

iOS 11 has often been described as one of <a href="http://news.softpedia.com/news/apple-s-new-… (read more)