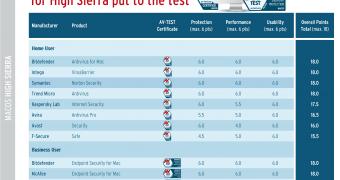 They say Macs do not require antivirus software given the security features and restrictions bundled into macOS, but recent cyber-attacks have certainly proved otherwise.

And now a research conducted by German antivirus testing institute AV-TEST helped determine which of these security products developed for macOS can truly block the existing threats.

In the case of home users, AV-TEST evaluated eight different security solutions, out of which no less than four got the maximum score by getting 6 out of 6 points in the three tests for protection, performance, and usability.

Avira Antivirus Pro was one point behind with 16.5 points, while Avast Security and F-Secure Safe were the last products in … (read more)