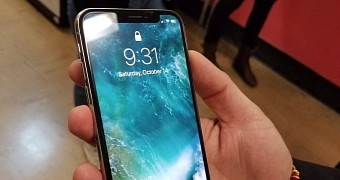 The iPhone X is projected to launch early next month, and while everyone awaits the moment Apple kicks off the pre-order program, more photos show the device in the wild in San Francisco.

While until now we’ve seen lots of pics showing the iPhone X being tested by what were believed to be Apple engineers, the majority of the shots were more or less blurry in the form of spyshots, as the people who took them clearly didn’t want to be noticed by the alleged owners.

But today we finally get a couple high-quality photos with the iPhone X courtesy of a reddit user who discovered the device being used once again in San Francisco.

There’s nothing too surprising in these photos, other than the iPhone X itself, which many redditors believe that it looks better in real-life than it does in Apple’s marketing materials.