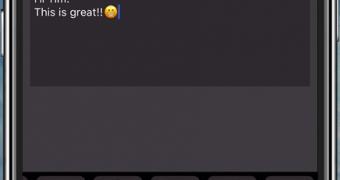 iOS 12 will be rolled out in September with several major new features, and just as it happens with every new release, users are still waiting for more, especially in terms of customization and usability.

While Apple has so far been quite reticent to changes in this regard, designers and developers around the world have proposed several ways to improve iOS in this regard. Including a concept envisioning what the MacBook Pro Touch Bar would look like on an iPhone.

As you can see on the project’s GitHub page, the Touch Bar would adapt to each app where it’s implemented and offers features that improve the way users interact with them.

For example, keyboard apps could use the Touch Bar for quick access to extra features like emoji, numbers, or punctuation marks, while also offering general purpose controls, like buttons for adjusting brightness and sound.