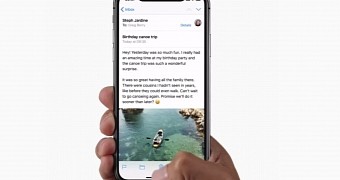 Apple doesn’t use to change the official ringtone of the iPhone when new models are unveiled, and the last time that happened was on iOS 7 when it introduced the sound that we now hear pretty much all around us.

But since it’s just a major release, the iPhone X comes with a completely new ringtone as well, and it is called “Reflection” in typical Apple fashion. The ringtone appears to be part of iOS 11.1, which will ship pre-installed on the iPhone X and which is already available for those who want to dig deep into its files in GM form.

Of course, it didn’t take too long until skilled users managed to extract the new ringtone, so check out the end of the article if you’re looking for the download link.

Exclusive to the iPhone X

Apple hasn’t said a single thing about the new iPhone X ringtone, but the company is well known for choosing sounds that always have a story behind them.