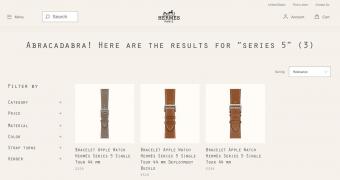 A new iPhone generation is just around the corner, and while people familiar with the matter previously said that some other products could also be unveiled on September 10, no specifics have been provided in this regard.

For example, Apple is expected to take the wraps off an Apple Watch refresh, albeit for now, it’s not known if this is a completely new-generation device or just an update to the existing Series 4.

However, if what seems to be an accidental leak by one of Apple’s top partners is anything to be believed, the next Apple Watch to see daylight could be Series 5.

Hermes, which makes premium bands for the Apple Watch, has recently published listings for “Series 5” devices, suggesting that Apple could take the wraps off the Apple Watch Series 5 at the September 10 event.

It’s believed that these listings are actually placeholders for new bands going live after the event, but at the same time, … (read more)