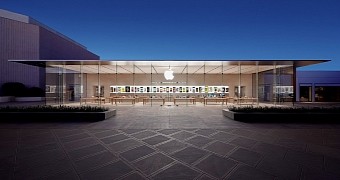 Moped crime is on the rise in the United Kingdom, and the latest case involves ten people who broke into an Apple Store and managed to steal devices worth thousands of pounds.

The Apple Store on the Regent Street was attacked on Monday a little after 12 AM by a moped gang who used a scooter to break the glass doors and raid the location to steal Apple devices.

According to reports, the criminals used hammers to threaten security guards who attempted to stop them, with the gang spending less than 3 minutes inside the store before rushing outside.

“A security guard in the store was threatened with a hammer as he tried to stop the suspects. The mopeds then made off within a couple of minutes northbound along Regent Street. The suspects are described as wearing dark clothing. The man who threatened the guard was described as a black man,” the Met police said in a statement… (read more)