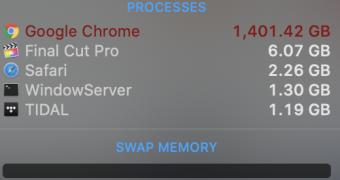 Google Chrome is one of the biggest resource hogs on desktop computers, there’s no doubt about that, and as it turns out, this isn’t limited just to Windows.

Users on macOS experience pretty much the same problem, so when YouTuber Jonathan Morris noticed the browser was eating up no less than 75GB of RAM on his maxed out Apple Mac Pro, he decided to test the limits of both the computer and Google Chrome.

And by the looks of things, Google Chrome is the one that stopped responding first, as it ended up using no less than 1.4TB of RAM on the 1.5TB Mac Pro.

A video that the YouTuber posted when Google Chrome was still at a little over 1TB of RAM shows the Mac Pro still running surprisingly smoothly, despite the fact that the browser itself was already unresponsive.

Chrome eating way too much RAM

Chrome has long been considered one of the applications that could easily end up slowing down your device, and this really hasn’t changed in the last years… (read more)