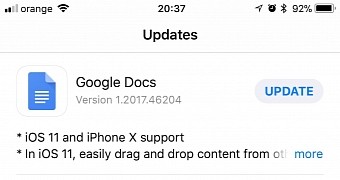 Google has finally started to show that it cares about its iOS users as well, and after rolling out an update for the official YouTube client to fix critical battery issues, the search giant is back with more goodies for iPhone X buyers.

Google Docs, Google Sheets, and Google Slides have all been updated with full support for the iPhone X, which means that apps are now rendered correctly and the notch is part of their UI, with no black bars at the top and bottom of the UI.

Additionally, Google says it has added full support for iOS 11 and bug fixes and performance improvements, so users whose devices are already running this latest version of the operating system should now experience better performance with Google apps.

And last but not least, there’s an exclusive tweak for iPad users, as Google enabled iOS 11 tablets to drag and drop content… (read more)