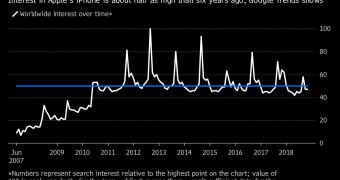 We’ve known for a while that the new iPhones aren’t selling exactly as expected, but more and more news in this regarding keep making the rounds, showing that Apple needs to act quickly to reignite demand for its models.

Living proof that interest in iPhones is dropping is a batch of statistics provided by Google Trend, which analyzes the number of searches conducted by users throughout the years.

As you can see in the graph below, the interest in Apple’s iPhone is currently below half of the peak that the device reached back in September 2012. More worrying, however, is that the graph shows a declining trend for the iPhone, and every year, the peak is substantially smaller than in the past.

This year, it looks like the peak was touched on September 12 when Apple announced the new-generation iPhones, and this makes sense because most people were interested to see what the new devices bring new.

However, the interest dropped gradually in the next few weeks and may… (read more)